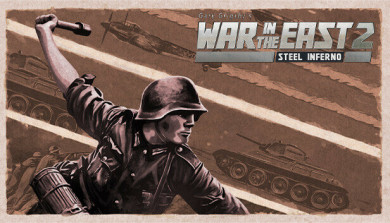 Steel Inferno puts the spotlight on several major offensives that influenced the course of the war in the East, while opening up new areas of the War in the East 2 map. With 8 new Scenarios and 2 new Campaigns, it will significantly expand your War in the East 2 experience.

For the first time in the War in the East 2 series, operations in all of Yugoslavia in 1944 are covered. Finnish forces also make an appearance in the area just north of Leningrad. Several scenarios cover the German attack into the Caucasus, including a hypothetical scenario that provides the Germans with an additional army for the campaign. Drama on the Danube places the German player in the difficult position of trying to deal with the surrender of Romania and Bulgaria, and the difficulties of the German forces in Greece trying to escape north through partisan-controlled territory.

Also included are two new full map campaigns which begin with the German Operation Citadel in July 1943 and about a month before the Soviet Operation Bagration in May 1944.