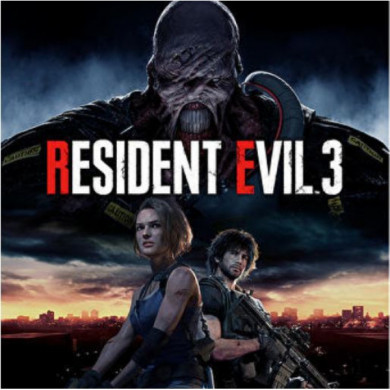 Witness the climactic events of Raccoon City in a completely reimagined Resident Evil 3. This highly demanded follow-up in the 94 million unit selling franchise comes on the heels of the award-winning Resident Evil 2, and completes the Raccoon City story arc. Resident Evil 3 will also include the online 4vs1 asymmetric multiplayer experience Resident Evil Resistance when it releases on April 3, 2020 for the PlayStation®4 computer entertainment system, the Xbox One family of devices including Xbox One X, and Steam.

In Resident Evil 3, S.T.A.R.S. member Jill Valentine, one of video games’ most iconic heroines, flees a city being consumed by zombies and other horrifying creatures. Built with Capcom’s proprietary RE Engine, Resident Evil 3 uses modernized gameplay to combine action with classic survival horror in vivid high-definition.

Jill’s harrowing experiences in Resident Evil 3 take place in the nightmarish hours leading up to and following the events in Resident Evil 2, shedding new light on the plight of Raccoon City’s residents. Every hope of escape is cut off by another star in the Resident Evil franchise: the towering Bio Organic Weapon Nemesis. This brutal yet intelligent monstrosity uses an arsenal of high-powered weaponry to indiscriminately eliminate any surviving S.T.A.R.S. members in the city – with Jill being his final target.

For the first time in the Resident Evil series, experience tense 4 vs. 1 asymmetrical online matches that invite players to craft horrifying challenges for others to overcome. Embodying the series’ trademark tense atmosphere and puzzle-solving in a new gameplay format, Resident Evil Resistance lets players architect a sadistic experiment or work together to escape as a team. Developed in partnership with NeoBards Entertainment, Resident Evil Resistance brings a new nightmare to life using the high quality gameplay and remarkable visual fidelity of Capcom’s proprietary RE Engine. Choose a side when Resident Evil Resistance launches as part of Resident Evil 3 on April 3, 2020 for the PlayStation®4 computer entertainment system, the Xbox One family of devices including Xbox One X, and Steam.

In Resident Evil Resistance, four Survivors must strategically work together, using their respective special abilities, to escape a Mastermind’s watchful eye across a match composed of three stages of traps, puzzles and horrors. Each of the Survivors can use a variety of tools, weapons and unique personal skills to help their team overcome the Mastermind’s challenges and survive the sinister machinations.

The Mastermind plots his or her deadly experiment using a network of security cameras that track the Survivors’ every move. In addition to remotely manipulating the environment, each of the Masterminds uses a deck of cards that summon vicious creatures, set traps, and weaponize security cameras to divide and overpower their test subjects. Each Mastermind also has his or her own specialties to keep their experiment under control, such as enhancing their monstrous creations, traps or security cameras. Masterminds who prefer a more personal touch can choose to directly control any zombies in play or even devastating Bio Organic Weapons such as the deadly Tyrant – a first for the Resident Evil franchise.